Showing posts from October, 2010
Show all

October 30, 2010
Burning Bushes and Plagues of Frogs 1. How old was Moses when he returned to Egypt? 2. Where was the burning bush? 3. Can bushes burn without burning away? 4. Can sticks turn into snakes? 5. What did Moses and Aaron ask the Pharaoh to do? 6. What have red rivers, dead fish, and plagues of frogs got in common with each other? 7. Which plague was the first that the Egyptian magicians failed to copy? 8. Did God try to help the Egyptians at all? 9. Did the Egyptians try to help the Israelites at all? 10. If the Israelites fled across the Sinai peninsula, how long would it take to escape Egypt? The Bible says Moses was grown up (Ex 2:11) when he fled from Egypt and 80 (7:7) when he returned. A generation was about 25 years though it might be “estimated” at 40—a generic big number. 80 years could represent two generations, making Moses about 50 and Aaron 53. (When the Israelites are spend 40 years in the desert, 40 years is described as the same as "a generation": Num 32
1 comment
Read more

October 29, 2010
Young Moses 1. Why were the Israelites in Egypt? 2. How long were the Israelites in Egypt? 3. Where did the Israelites live in Egypt? 4. How many Israelite midwives served the whole community? 5. Why wasn’t Aaron killed as a baby? 6. Why wasn’t Moses killed as a baby? 7. What was the name of Moses’ real mother? 8. What was the name of Moses’ foster-mother? 9. Why might Moses have written some of the books of the Old Testament? 10. Why did Moses run away? At the end of Genesis, God’s people are living in the hill-country of Goshen near the Nile delta, near the area where Rameses will later be built. They’re pretty isolated from other Egyptians, since they’re shepherds and shepherds are despised. They stayed there for 400 years (Ex 12:40) and probably consolidated their memories of the Genesis stories while telling them round the camp-fire. Other tribes may have added and expanded traditional stories in the retelling, but the Israelites believed their stories to be God’s word
Post a Comment
Read more 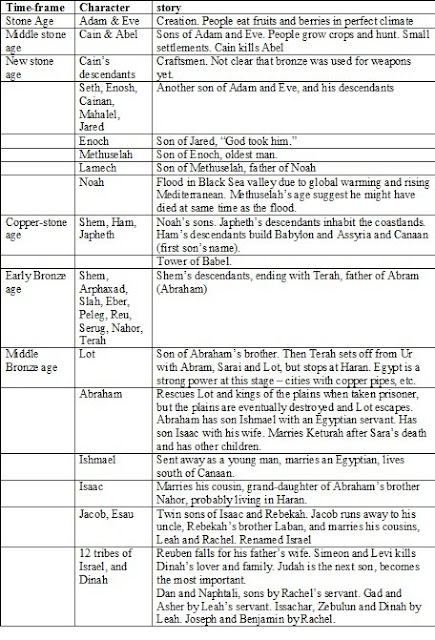 I'm teaching a class on faith and science at church on Sunday. If you want to see my notes, I'm posting them on http://refracted-muse.blogspot.com Joseph 1. Who was Joseph’s mother? 2. Was Joseph the youngest son? 3. Was Joseph a patriarch? 4. What did Judah do? 5. Which brother didn’t want Joseph to be killed? 6. Who was Joseph sold to first? 7. When did Joseph first know he could interpret dreams? 8. How forgiving was Joseph? 9. What happened to Joseph’s sons? 10. What happened when Joseph died? Joseph was the first-born of his father’s favorite wife, Rachel. For a long time he was the youngest son—most likely the spoiled pet. He was probably a young teen when the family moved back to Canaan—Jacob is said to have worked 7 years each for Leah, Rachel, and his flocks, but the number might be symbolic (7 can stand for a plan). Soon after the journey, Rachel’s second child Benjamin is born and Rachel dies. At seventeen, Joseph tells tales on his brothers (Gen 37) an
Post a Comment
Read more

October 21, 2010
Twelve Tribes of Israel 1. What relation is Laban to Jacob? 2. How many holy dreams did Jacob have? 3. How long after marrying one sister did Jacob get to marry a second? 4. How many children did Leah have before Jacob began sleeping with the maids? 5. What have Jacob’s sheep got to do with the Bible? 6. What happened to Laban’s household gods? 7. What happened to the hollow of Jacob’s thigh? 8. What happened to Dinah? 9. When did Jacob’s name change to Israel? 10. How did Judah become the most important son? Jacob goes to Padamaram, or Haram, or Nahor, where he stays with his uncle Laban, brother to Rebekah and grandson of Abraham’s brother Nahor (hence that extra generation in Abraham’s age—he was indeed an elderly father). Their relationship is cordial and Jacob works 7 years for the privilege of marrying the younger daughter Rachel, but finds himself wed to Leah instead. (There really were traditions that oldest daughters should marry first, and that wives and their maid
1 comment
Read more

October 20, 2010
Abraham, Isaac and Jacob 1. Why did Abram have a child with his wife’s handmaid? 2. How old was Ishmael when he was sent away from home? 3. What happened to Ishmael after he was sent away from home? 4. Did Ishmael and Isaac keep in touch with each other? 5. How many women bore children to Abraham? 6. When did Abram’s name get changed to Abraham? 7. How many times did God repeat his covenant to Abraham? 8. Who did Isaac marry? 9. What did Esau do wrong? 10. What is Jacob’s ladder? Abram returned home after rescuing Lot from Chedorlaomar, and wondered why he still hadn’t got any of those divinely promised descendants. At this point, his wife suggests he try the traditional Egyptian solution, having a child by her servant Hagar (Genesis 16). According to the Bible, Abram is 86 years old when Ishmael is born and 100 at Isaac’s birth, making Ishmael clearly the older brother. (The age difference is small enough to be convincing, while Abram’s 86 years might mean two generations p
Post a Comment
Read more

October 04, 2010
Abraham and Lot Who set out from Ur of the Chaldees heading for the land of Canaan? What relationship was Lot to Abram? How often did Abram pretend that his wife was his sister? Who were the “kings of the plain”? Who was Melchisedek? What happened to Sodom and Gomorrah? Why were Sodom and Gomorrah destroyed? Where did Ishmael’s mother come from? How old was Ishmael when Sodom and Gomorrah were destroyed? How old was Ishmael when Isaac was born?  Genesis 11 describes the many generations of mankind scattered at Babel, and finally reaches Terah, father of Abram, Nahor and Haran. Terah lives in Ur of the Chaldees and sets out, after the death of his son Haran, to go to Canaan. Terah’s son Abram travels with him, bringing his childless wife Sarai and nephew Lot, son of Haran. Abram’s other brother Nahor appears not to have left Ur at this time. Terah stops before he reaches Canaan and lives out his life in the town of Haran (perhaps
1 comment
Read more
More posts