The Five Minute Bible Story Series is at the Virtual eBook Fair again this weekend. Just click on the link to find authors and ebooks galore, with samples to read, book information and more... Though I'd love to have you read the rest of this post before you go there. After all, this is my booth at the virtual ebook fair, and I'm inviting you to read a sample story from Exodus Tales this time. Imagine children at the time of Moses, watching their fathers dragged off as slaves, eating a frantic meal in the dark, setting off on a trek across the desert--and what was that column of smoke ahead that turned to fire by night and why couldn't they touch it... 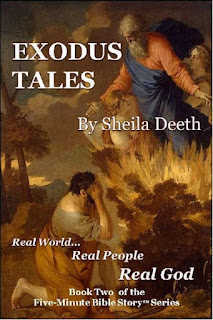 ~ 19 ~
THE RUNNING BOY
(Exodus 12:11,35-36, 13:21-22, 14:21-25)
Once there was a little boy who liked to run everywhere. When soldiers came to his village, the little boy ran in and out among their animals and nobody could catch him. When strangers visited his village, he ran in and out between their carts and nobody could catch him. And when he was in trouble, he ran away from his family as fast as he could and nobody could catch him.
One day the little boy’s family said he had to stand still for a very special dinner. “But I want to sit down,” he said and they said no. “I want more meat,” he said but they told him to eat what he was given. “I want to run,” he said but they made him stay.
Suddenly there was lots of screaming outside. Women were crying and soldiers were ordering the villagers to leave. The little boy ran down the hill into town. Rich people started throwing jewels at him, which was really very odd. The little boy picked up as many jewels as he could, until his bag was almost too heavy to carry.
Soon the little boy and his family were walking across the desert. The little boy kept running ahead. There was a column of smoke that God had given them to follow. Of course the little boy wanted to get in front of the smoke but he never could. At night there was a column of fire and the boy wanted to run and touch it, but he couldn’t. It always seemed so very close and it was always so far away.
After seven days marching across the desert, the people came to the sticky mud by the sea. The little boy tried to run in the sticky mud but he fell over in the reeds. Then he saw soldiers and ran back to warn his family.
Everyone was frightened of the soldiers. The grownups started to say they should have stayed where they were in Egypt, even though they’d been slaves. The little boy tried to run away through the sea but it was too deep. Then he tried to run through the armies, but they were too strong and scary. So he started to cry.
A really big storm came up that night. The little boy wanted to run like the wind, but the wind was too fast for him. The wind was too fast for the sea as well and blew it all away. So, in the morning, the people walked across the sea and didn’t even get stuck in the mud. Of course the little boy didn’t walk. He ran.
When the little boy looked back, soldiers were trying to cross the sea as well. But their heavy shoes got stuck in the mud and they all fell down in the reeds. There was a big roar and the wind suddenly dropped. Then the water came back and washed all the soldiers away.
“We’ve made it. We’ve run away,” said the people and danced a happy dance. It was very strange. When the little boy ran away he always got into trouble. But when the Israelites ran away from Egyptians everyone was happy and praised God. Grownups are so confusing.
Lord God, we can never run away from you, and that’s really good.
Please help us go wherever you tell us to go,
run when you tell us to hurry, and stand still when you tell us to stay.
Readers say:
“Fun reading…Accurate…Stimulates discussion…”
engaging, meant as a "middle-school reader for book-lovers of all ages."
would provide a good gift alongside a new Bible...
and kids ask for "Just one more" at bedtime.
Go to http://www.amazon.com/Exodus-Tales-Five-Minute-Series-ebook/dp/B00AOQG0ZY/ to purchase your copy, or look for more books in the series at http://capearagopress.com/Five-Minute.html. And enjoy!