Here I am at the virtual book fair again, offering a five-minute story from Joshua's Journeys, book three of the Five Minute Bible Stories Series (TM) from Cape Arago Press. After you've read the excerpt, click on the Virtual Ebook Fair image above to find more books and samples from other authors, and enjoy!

The Israelites escaped from Egypt in Book Two (Exodus Tales) and made their way to Mount Sinai where God gave them his laws. They've built and furnished God's temple at last and Aaron's sons have trained with him as priests. Now it's time for the great sacrifice before their journey begins to the Promised Land. 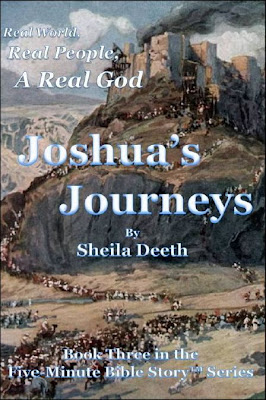 ~ 2 ~
THE BOY WHO PLAYED WITH FIRE
(Numbers 34:20, Leviticus 10:1-2)
There was once a boy called Shemuel who loved to play with fire. He lived among the Israelites, back in the time when they camped at the foot of Mount Sinai, when Moses and Joshua were still on the mountain with God. The Israelites all lived in tents. Mothers cooked on fires outside the tents while fathers made fires in the middle of the camps to keep everyone warm. Shemuel liked the way flames flickered and flurried in the air. He thought the sparks looked like tiny stars in the sky. And sometimes he grabbed a flaming stick and held it in front of his eyes.
“Don’t play with fire,” said Shemuel’s mother. Shemuel asked why not and she answered, “Because you might burn yourself and go blind.”
“Don’t play with fire,” said his father, “because you might die.”
But Shemuel didn’t listen to them. Whenever he thought no one was looking he played with fire until, one day, the fire played with him—flames danced along the arm of his coat and looked so pretty Shemuel didn’t realize until too late that the flames were dangerous. Luckily someone was watching him after all. His friend’s father wrapped Shemuel in a blanket and put out the fire. His friend’s mother brought special herbs and ointments. And Moses came and prayed for him. Then Shemuel got better.
One day Shemuel’s mother said the Israelites were going to have a special feast. Moses and Joshua and Aaron, the High Priest, had finished setting up God’s tent in the middle of camp. Aaron’s sons were ready to become God’s special priests at the altar. They dressed in bright-colored robes, and the people brought special animals for the sacrifice and the meal. There was fire on the altar, and fire in the holy baskets that the new priests carried. But Shemuel stayed well out of the way of the fire. He’d learned his lesson.
Moses and Aaron told the priests to wait for God’s command before going to the altar. But two of the priests rushed forward anyway. “No, wait,” said Moses. “No, wait,” said Aaron. But the priests didn’t listen. Suddenly fire and smoke poured down on them. Shemuel couldn’t tell if it was coming from the ground or the sky or pouring down the mountain. He covered his eyes and cried and, when he looked again, the two young priests were dead.
“Did God burn them for not doing as they were told?” Shemuel asked.
“Perhaps,” said his mother.
“Did God burn me for not doing as I was told?” asked Shemuel.
“Perhaps,” said his father. “Or perhaps when we tell you what to do, and when God tells you what to do, we’re all just trying to keep you safe.” Shemuel thought that made sense and decided he’d do as he was told in future.
Thank you God for giving us your Commandments to help us keep safe.
Thank you for giving us your Spirit who lives with us and rescues us.
Thank you for giving us your Son who forgives us when we make mistakes.
Find Joshua's Journeys on Amazon at http://www.amazon.com/Joshuas-Journeys-Five-Minute-Stories-ebook/dp/B00AP9IAR6/
Read more stories from Joshua's Journeys at http://www.capearagopress.com/sample_joshua.pdf
Or find out more about the series at http://capearagopress.com/Five-Minute.html
Joshua Sample Saturday