August 29, 2013
Coming soon--Bethlehem's Baby, to be followed by Nazareth Neighbors, Galilee's Gift, and Jerusalem Journey.  Don't the covers look great together! But what about the stories...? 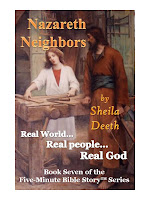 See below to sample a story from Bethlehem's Baby. If you like it, would you be interested in reading more and writing a book review? Perhaps you could host a blog tour event during October. Please let me know.

Bethlehem's Baby will be out next month, to be followed by Nazareth Neighbors, Galilee's Gift and Jerusalem Journey.

The book contains 40 short (Five-Minute) stories that follow the Biblical narrative of the birth of Jesus, the visit by the shepherds, the presentation in the Temple, the Wise Men, the flight to Egypt and the Holy Family's return to Nazareth. Filled with interesting facts, quirky characters and lots of humor, it makes great bedtime reading for young children. Each story contains a Biblical reference and ends with a prayer."
Would a sample story tempt you to host me perhaps? I'm posting story #18 here, since it's one of the numbers requested last week during the Virtual Ebook Fair. When you've read it, don't forget to follow the link back to the fair for more great end-of-summer reading samples.

(Luke 2:8-19)
There was once an old shepherd who complained all day and all night, moaning miserably, “Be quiet,” and, “What’s that noise?”

One evening, the shepherd heard footsteps crunching on the cold, sandy grass. “What’s that noise?” said the old shepherd.

“Well, bring it faster. The stew will be cold and the bread’ll be old and dry.”

“Yes, Grandpa,” said the boy. Then he hurried back to the other side of the fire to eat his own meal, and roll pebbles with his friends.

But, “What’s that noise?” shouted the old shepherd, thudding his bowl onto the ground.

The children moved further away from him, and rolled their stones where they hoped he couldn’t hear them.

Soon the sky darkened and stars began to appear. It was time for boys to snuggle under blankets near the fire while their fathers stood guard. Sheep muttered and ba-a-ed, munching and crunching at strands of winter grass. The crescent moon hung pale and silver over the trees.

“What’s that noise?” said the old shepherd again, waking his grandson up.

“It’s just the wind in the branches, Grandpa. Or sheep bleating. Or twigs crackling in the flames.”

Neither can a boy, thought the boy. But soon a gentle snoring sound arose from the old man, and everywhere went quiet. The boy lay still, dreaming of rolling stones and throwing rocks and building castles in the air where monsters and dragons could play with him. Then something bright shone through his blankets and startled him awake. The air was filled with sound like a roaring wind or dragon’s breath. Bright light blazed over the hilltop like dragon fire.

“What’s that noise?” grumbled Grandpa, while wailing wind turned to sounds of music and choirs.

Stars still shone, but behind them the night sky was white as the moon and bright as the midday sun. Sheep flitted like pale ghosts drifting under trees. Shadows quivered all around. And the shepherds crouched in fear.

“Don’t be afraid,” said a gentle voice, though it didn’t seem to calm them. The boy struggled to hide his face, then peeked between his fingers to see strange people floating in the sky. Flames flickered like angel wings behind them. Perhaps they were angels. The boy moved his hands away and stared in delight while his grandfather still growled, “What? What’s that?”

“We bring good news,” the angels said, their voices like the singing of priests rising up from the roof of the Temple. “This day, your king is born. This day, a baby brings salvation to all.”
The boy wondered vaguely what ‘salvation’ meant and why angels would sing about a baby.

Meanwhile all the shepherds began to look up. Even the old grandfather sat staring, silent and smiling for a change. The boy crawled over to his father and tugged on his sleeve. “Dad, can we go see the baby d’you think? I’d like to see a king.”

Then the angels replied, pointing their hands and their light toward Bethlehem. “You’ll find him there,” they sang, “in a manger. Go and see.” So the shepherds stood up—even the old man who always complained he could scarcely walk anymore. They hurried down the hill to the small town nestling below them, children rushing ahead, and the old man’s grandson in the lead.

“This way! This way!” the boy shouted, and his grandpa didn’t even ask him, “What’s that noise?” Instead everyone followed to a stable in the basement of a house, where they found a baby and fell to the floor to worship their newborn king.

Lord God, help us listen through all the noise around us and hear your voice.
Help us worship you each day and rejoice,
even when the worship’s noisy; even when we don’t like the songs.
Please help us see Jesus in the people around us,
as well as in the manger of Bethlehem.