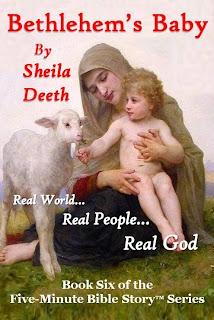 Bethlehem's Baby will be out next month, to be followed by Nazareth Neighbors, Galilee's Gift and Jerusalem Journey.
The book contains 40 short (Five-Minute) stories that follow the Biblical narrative of the birth of Jesus, the visit by the shepherds, the presentation in the Temple, the Wise Men, the flight to Egypt and the Holy Family's return to Nazareth. Filled with interesting facts, quirky characters and lots of humor, it makes great bedtime reading for young children. Each story contains a Biblical reference and ends with a prayer."

Want to read a sample? I'm here at the virtual ebook fair again (click above for lots and lots of great reading samples!), and I'm rolling a die for a number between 1 and 40, so enjoy... 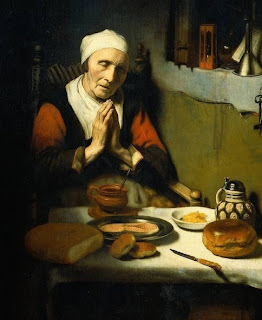 Once a year, Elizabeth’s husband went away to serve in the Temple for two weeks. When it was time to go, he talked about how he’d need an extra blanket in case it was cold at the Temple. He complained about how he never got chosen to serve at the Altar of Incense. And he moaned about how the other priests always teased him for not having any children. Meanwhile Elizabeth packed his spare sandals and shirt into his cloak with a packet of bread to eat on the journey and some eggs and a flask of wine.

At last Elizabeth’s husband was ready to go. He complained about how far he’d have to walk, and how the Roman soldiers might stop him and demand his papers. Then he worried about whether Elizabeth had remembered to pack his spare sandals. Elizabeth had, but she didn’t tell him because he wasn’t listening. Then he said, “Goodbye,” and marched off down the road. Meanwhile Elizabeth marched back into her house and heaved a sigh of relief. It was actually quiet!

On market day Elizabeth went shopping. Children shrieked and shouted as they played between market stalls. Elizabeth really wished she had children, but she was rather glad nobody was shrieking in her ear. Then she went home to grind wheat into flour and bake bread, and she smiled at how wonderfully, marvelously peaceful and quiet it was in her house.

A few days later a visitor came to Elizabeth’s village from the Temple. “Did you hear about the priest?” the visitor said, as people gathered around him asking for news. “He was serving at the Altar of Incense and he got struck dumb!”

How very wonderfully, marvelously quiet that would be, Elizabeth thought. But the priest in the story obviously couldn’t be her husband. For one thing, Elizabeth’s husband always said, at very great length, that he’d never get chosen to serve at the Altar of Incense. For another, it was completely impossible to imagine Elizabeth’s husband not being able to talk.

Soon Elizabeth’s husband was due to come home. Elizabeth went to the edge of the village to meet him. The white-walled Temple shone under the sun in the distance, but Elizabeth’s husband said nothing about how beautiful it looked. As they walked to their house, he said not one word about whether it was nice to come home, or whether the house was tidy, or even, “What’s for dinner?” When he sat down to eat, he didn’t even bless the food or thank God for providing it. Instead he sat with his head bowed low and his hands spread out as if he were… silently?… praying.

Poor Elizabeth. Her house didn’t feel wonderfully and marvelously quiet anymore; it felt scarily silent. Elizabeth couldn’t understand how her husband, who always talked so much, could have suddenly forgotten how to speak. But that was only the beginning of Elizabeth’s problems. The next thing she found out was that she was going to have a baby—a screaming, shouting, laughing, screeching, shrieking, noisy little baby. Then it wouldn’t even matter if her husband talked too much because she wouldn’t be able to hear him.

Nine months later, Elizabeth’s baby was born. All the villagers came to celebrate. Elizabeth’s house wasn’t even a tiny bit quiet. It was filled with lots of happy, excited noise. But Elizabeth’s husband remained completely silent, right up until the moment he wrote on a piece of paper, “The baby’s name is John.” Then suddenly he could talk again, and suddenly Elizabeth knew she was really glad to hear his voice. There is such a thing as simply too much peace and quiet after all.